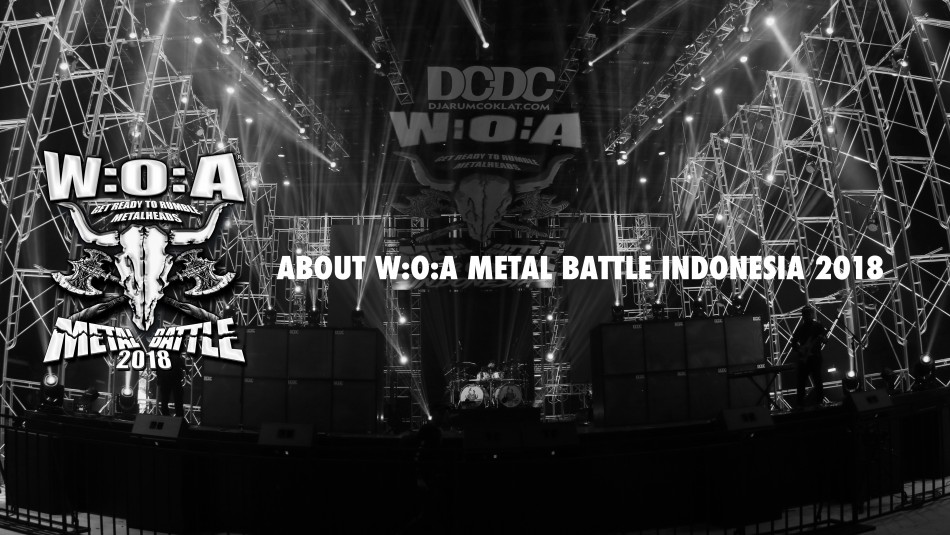 For the second time, Wacken Metal Battle was held in Indonesia. This competition intended for extreme bands throughout Indonesia. Continuing the cooperation that built since 2017, Wacken Metal Battle Indonesia 2018 (WMBI 2018) was held on cooperation between DjarumCoklatDotCom (DCDC), ATAP Promotions, and The Metal Rebel. This is a movement that perpetuated in order to support the development of the realm of Indonesian extreme music. Since Indonesia has a lot of great bands all over the country, wider space is obviously needed. Besides, Indonesian extreme bands have great qualities and deserve to be seen in international metal music industry.

This year, 322 bands from 72 cities throughout Indonesia joined WMBI 2018. They registered their bands by online registration at www.djarumcoklat.com. The registration was opened for four months (February – May). All of these bands assessed by four Judges, which are Dadan Ruskandar (Burgerkill Management), Samack (Senior Music Journalist), John Resborn (The Metal Rebel) and Sascha Jahn (Headquarter of Metal-Battle, Germany). All of the WMBI 2018 activities monitored by Steering Committees, which are Ebenz (Burgerkill), Kimung (ATAP Class), and Man (Jasad).

This material of this Big 30 compiled in a compilation titled “Wacken Metal Battle Indonesia 2018 - The Big 30 Compilation” and released as a promotional material and will be given for free. The purpose of distribute this compilation is to give an opportunity for these bands to be known in international music industry.

There were two activities that’ve been done on the final. First, they had a technical briefing, interview and sharing session with the Judges, Steering Committee, and Beside (former winner of Wacken Metal Battle Indonesia). They need to understand about what they have to do in global metal scene, since Indonesia is still developing its way to be seen in international music industry. They will not only represent themselves, moreover they are representing Indonesia. This session was held at June 28th, 2018.

The second one is live performance. “Final Show – Wacken Metal Battle Indonesia 2018” was held at June 29th, 2018 in MNC Studios, Jakarta, one of the biggest studio in Indonesian television industry. More than 1000 audiences came to watch their performances. The stage, lighting, and sound system were set up in such a way, so everyone who were in that place could feel the vibe of Wacken Open Air in Germany.

The Judges assessed them while the band performing their best. All of the bands were performing at their best and the Judges had a hard time to decide a name. After a long consideration, Down For Life decided as Indonesian representative at Metal-Battle, Germany 2018. Undoubtedly, they are deserved to play at Wacken Open Air and represent Indonesia.

At the end, this is a huge movement that has to be done in the name of Indonesian extreme music scene. Down For Life will show their best performance and every stakeholders that involved in this movement has to support them. Indonesia has a lot of great bands and all of those bands need to affiliate and penetrate global music industry together.